Setting up a software RAID-5 on a Dell T310 server

Got the opportunity to wet my feet on setting up a software-based RAID-5 on a Dell PowerEdge T310 server, within Windows Server 2008. Quite an experience!

The hardware
The system was originally equipped with a 250GB drive. It contains the OS and we left it alone. Installed 3 additional, identical, drives: 1TB Western Digital Caviar Black. These are 7200 RPM drives with 32 MB buffers. The question was whether to go for the RE4 drives (also from WD), but those are about twice as costly, and this is a medium load dev & test server, so it was decided to stick with the Blacks and save some Green.

Drive installation
This was somewhat unexpectedly tricky. The physical installation was a breeze of course - just pull out the drive trays, set the drives into them, push them back in and snap in the connectors. But, the system refused to boot after this - LED indicators 1 and 4 lit up and that was it; the system did not even get to the BIOS setup screen.

After some initial irritation ("a drive must be DOA!"), we tried out the drives in a different machine (desktop, not server); all worked perfectly. Good. Then, a bit of research into the owner's manual for the T310 showed that there's a jumper on the motherboard that clears the stored configuration when the system is next restarted. Set the jumper accordingly, plugged-in and restarted the system, and... no luck! What! Restored the jumper, tried again, same results. Again toyed with the jumper; nope. I think the fourth time around I saw what initially looked like an unbelievable dream - various LED lights flashing back and forth, the disk light flashing, and generally speaking a sight very different from the steady 1 and 4 indicators! Scrambled to press F2 to get into the setup screen. The drives showed up fine.

There must be something that I missed here. Drive installation would not be such a hit-or-miss approach. Besides, this would tend to disprove the theory that trying the same thing repeatedly and expecting success is madness.

Setting up the RAID-5 in Windows Server 2008
Once Windows booted up, went into Start > Computer Management, and clicked on Disk Management (under the Storage subsection). The 3 additional drives showed up fine, although unformatted and unavailable for use at this point. In Windows Explorer, they are not showing up yet.

Right-clicked on one of the new drives in the Disk Management UI screen, and was immediately presented with an option to set up a RAID-5. Selected that option led to further screens where the remaining 2 drives were added into the RAID, and that was about it. Once the new drive name and letter were specified, the system started to sync the 3 drives together, to form a 2TB volume using the 3x1TB drives.

Note that the system can set up the drives as RAID-0, RAID-1 or RAID-5; available options will depend on how many drives are available (with just 2 drives, the RAID-5 option will be grayed-out).

Another important note when setting up a RAID-5: you cannot have data on a drive, and then add 2 more drives and try to get them all into a RAID-5 configuration (though you can mirror the original drive). All the 3 drives must be empty when you start.

Once we gave the go-ahead to start the sync, the system takes a long, long time! This is the progress after about 7 hours: 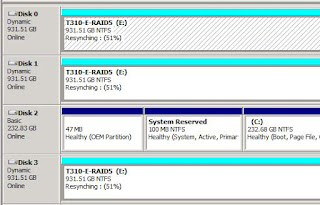 Interestingly, while the sync is going on, I can work with the drives - they show up as a single 2TB volume in Windows Explorer (E: in this case). I tried creating a simple Notepad document and it seems to be fine. However, I'm going to wait for the entire sync to complete before loading any real data on the volume.

Once done, this will give me 2TB of space, and a little peace of mind against disk crashes.

Posted by Krishna Gupta at 9:02 PM

Email ThisBlogThis!Share to TwitterShare to FacebookShare to Pinterest
Labels: Overview