Microsoft announced the release of the much-anticipated Visual Studio 11 Beta (VS 11) last week. After downloading and installing it today, here are my first impressions.

Downloading
The download from MSDN is an ISO (DVD image) file. It's almost 1.8 GB in size, and took a few hours to get (especially as I was simultaneously downloading SQL Server 2012 RC as well -- that one itself being 4.4 GB).

Next, I unpacked the ISO using 7-Zip, which is available (for free) from download.cnet.com. This way I could run the install directly from the hard disk; the alternative is to burn a DVD and then install Visual Studio 11 from that DVD. Or, if we want to neither unpack nor burn a DVD, 7-Zip also enables us to view the contents of the ISO, and permits running the installer directly from there without unpacking.

Installing
Installation was quite straightforward. It took about 2 hours on my machine, and requires about 10 GB of space. The first thing to notice was the new splash screen - stylish in blue and gray. While waiting, there's a cool set of 5 dots that repeatedly move across the screen, replacing the familiar green moving bar. With 2 hours to ponder over them, I concluded that each was pulling the one behind it using a rubber-band. This physics is especially noticeable when the 5th one is pulled away. 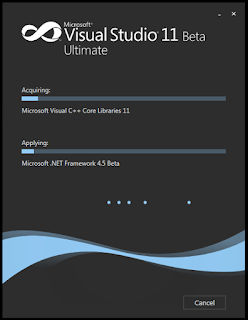 Once the install is complete, and after a mandatory restart, VS 11 is good to run.

Running Visual Studio 11
The first time it's run, it asks for your development environment preferences - C# or VB development, Web development and so on. Along with that, it also offers to copy preferences from the prior VS version - not sure how this overlap works or gets resolved. 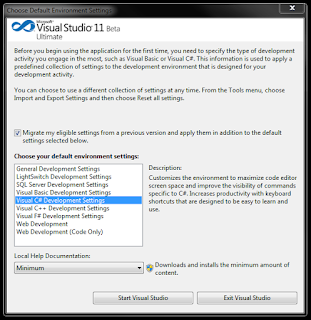 Once I got past that, the new Visual Studio 11 home screen came up. For Visual Studio 2010 users, the first difference is the switch in placements of the Open/Create Project and the Getting Started materials. The latter is now on the left, much more prominent. In some ways this highlights the available learning material, and that is a good approach. Graphics on the screens are monochrome presently; I imagine the designers at Microsoft are hard at work creating beautiful full-color icons that'll come with the final release. 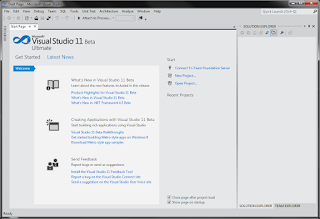 Visual Studio 11 comes with the latest .NET 4.5 framework, as well as with MVC 4. Together, the whole set forms a powerful team, and there's a ton of new material to learn -- as well as to enjoy! They contain great features both on the IDE side as well the .NET library side. It is installable side-by-side with Visual Studio 2010, and in fact one of the most interesting features (first time for any VS version, I think) is that a Visual Studio 2010 .NET 4 project can be opened in VS 11 as well -- without breaking it for VS 2010. This sounds like a really good feature for teams that may have some members using VS 2010 and others VS 11, allowing the team to upgrade gradually.

Shown below is a screenshot of the default MVC 4 web app, out of the box and without any additional coding at all. It definitely is a very far cry from the VS 2010 MVC 2 or MVC 3 starting points. 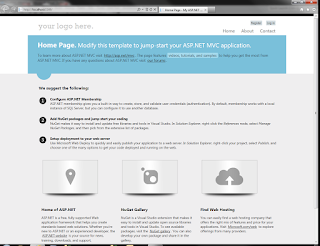 Downloading and installing Visual Studio 11 is easy, so don't wait any longer!

Posted by Krishna Gupta at 10:31 PM No comments: